Caledonian Sleeper is set to be transformed into Scotland’s first mobile bothy to offer guests a preview of Highland Adventure Fest.

Guests on board the London to Inverness service on Friday 22 March will be able to congregate in the Lounge Car ahead of the festival – which takes place on Sunday 24 March – and hear from Geoff Allan, author of The Scottish Bothy bible and a speaker at the festival.

Katie Masheter from Planit Scotland which is leading the event, said: “As a direct route from London to Scotland’s wilderness Caledonian Sleeper is often the preferred travel option for many adventurers and so we thought it was only fitting to host the preview of Highland Adventure Fest on board.

“The festival, which is in its first year and take places from 10am – 4pm on Sunday 24 March at Inverness Leisure Centre, is designed for all outdoor enthusiasts with talks, activities and exhibitors providing plenty of inspiration. We are very excited to be bringing a snippet of this to Caledonian Sleeper guests – we’ll even be offering complimentary tickets to Highland Adventure Fest so that guests can enjoy the event as part of their Highland escape.”

The Highland Adventure Fest event forms part of a calendar of seasonal and timely on board events hosted by Caledonian Sleeper which take place throughout the year, including on the new trains which are due to begin their introduction by the end of May.

Graham Kelly, Serco’s Guest Experience Director at Caledonian Sleeper, added: “The on board events offer our guests a snapshot of some of the great celebrations, festivals and events taking place across the country. Highland Adventure Fest is part of this exciting mix and we’re sure that the preview will get guests enthused about attending the festival or planning their next Scottish adventure.”

To find out more about Highland Adventure Fest, visit www.highlandadventurefest.co.uk

To find out more about Caledonian Sleeper, visit sleeper.scot. 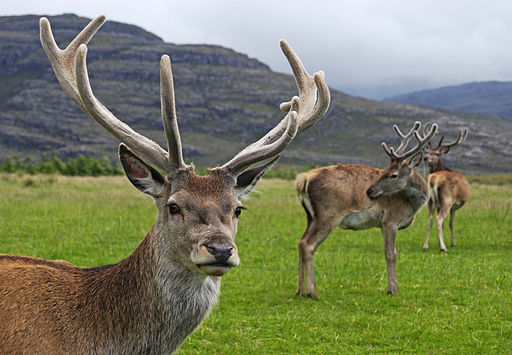 More than half a million people across the UK are expected to watch their garden birds this weekend (28 – 30 January) as part of RSPB’s Big Garden Birdwatch. There’s no better time to enjoy Scotland’s wildlife.

From mountain hares to red grouse, Caledonian Sleeper has highlighted some of the top winter wildlife spots to help families make the most of Scotland’s frost-tinted outdoor scenes.

Red Deer
Often seen roaming the hills, the majestic red deer is one of Scotland’s largest terrestrial mammals and one of the most impressive. Stags measure up to 120cm at the shoulder and can weigh between 60kg and 130kg, with antlers as long as 140cm and weighing 6kg each. As selective grazers of grass, heather and woody species, the fox-red coloured deer can be found in woodland as well as on moorland so are frequently spotted in groups during the colder months by walkers on mountain climbs or forest trails.

Alight at Fort William Railway Station to climb nearby Ben Nevis, the highest mountain in the British Isles, where red deer are plentiful and the most common land-dwelling animals in the area.

Mountain Hare
As Britain’s only Arctic animal, the mountain hare is perfectly built for racing down snowy slopes and coping with cold weather. With long, powerful legs and thick fur that turns white during the winter, the hare is often difficult to spot in crisp white snow. With some species reaching a top speed of 45mph – the equivalent of the average speed of an Olympic downhill skier – these impressive creatures can sometimes been seen on winter walks as they leap three metres in a single bound.

Look out for the mountain hare as you enjoy snowy views from the popular Cairn Gorm funicular railway, which is the UK’s highest, reaching 3,500ft.

Ptarmigan
A plump gamebird resembling a slightly larger grey partridge, the ptarmigan transforms its grey, brown and black feathers completely white, except for its tail and eye patch, during the winter. Breeding in the highest peaks of the Cairngorm Mountains, the birds are usually spotted in Arctic-like landscapes. However in severe cold weather they can also been seen on the edge of forests as they seek shelter.

Visitors can often catch a glimpse of these tough birds whilst dining at the Ptarmigan Restaurant, which is located at the top station of the Cairn Gorm Mountain and offers panoramic views down to Loch Morlich.

Red Squirrel
Cairngorms National Park is a refuge for Scotland’s native red squirrels, with the population now large enough for the small mammals to have found a home in other parts of the country. Often seen climbing on tree bark or chewing pine cones on the ground, the red squirrel can frequently be spotted on woodland walks. Look up amongst pine tree branches in the Caledonian Forest to spot the squirrels’ soft, bushy, red tails as they spring through the air or listen out for the skittering of claws as they dance among the tree tops.

With a superb collection of wildlife on its doorstep, visit Scotland on Caledonian Sleeper to discover these fascinating native species.